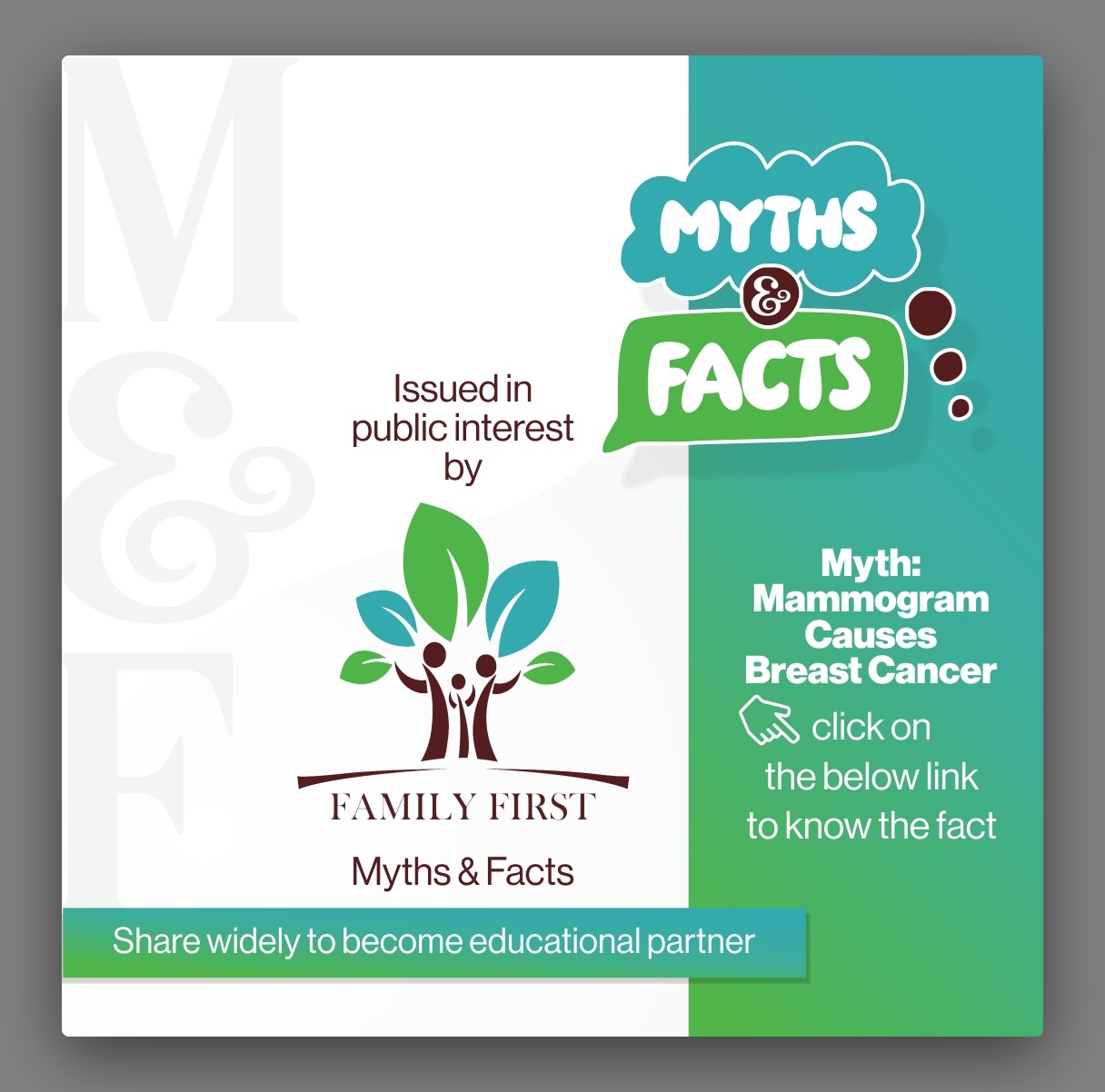 There are multiple myths associated with mammogram and the biggest is it causes breast cancer. We need to understand why this myth came up.

Mammogram is actually a low dose x-ray of breast. As all x rays have radiations so does have mammogram. However the radiations of mammogram are of low intensity and are absorbed by the body more than the normal x ray radiation. This is the reason why this myth came up. However we need to understand that the radiation caused by mammogram is less than 6 months of background radiation which we all are exposed to in our day to day routine life and which could be considered negligible. Hence getting a mammogram does not increase the risk of breast cancer however it has to be judiciously chosen. The mammogram is of no value if done before 30 years of age and is not of much importance if done before 40 years of age unless recommended due to positive family history.

Technique of doing breast mammogram is compressing the breast between two pads tightly and takes a x-ray. The compression is pretty tight hence the other myth associated is compression of breast during mammogram causes spread of breast cancer which is again a myth.

If at all any screening is required in cases of patients with no positive family history we can do a ultrasound which has more diagnostic value in a young patient having bulky glandular breast.

Ultrasound- it is a medical test that uses high-frequency sound waves to capture images from the inside of your body. It is a test of choice in cases of lumpy breast nodules or mass in breast. It is investigation of choice if age is less than 40 years or when a mammogram reveals suspicious density in a breast. We also advice FNAC (fine needle aspiration) of the suspicious masses of breast under ultrasound guidance.

There are so many cases in which ultrasound is very helpful like when a mammogram is normal but you can feel a palpable lump.

Every investigation has its limitation; ultrasound has also some limitations like

-it cannot image areas deep inside the breast

– It doesn’t show deep microcalcification (accumulation of calcium around a tumor, it is the most common feature seen on a mammogram)

To conclude – If a positive family history of breast cancer is present it should be done 10 yrs prior to the age of 1st degree relative detected for cancer i.e. if the mother was detected cancer at 45 years than the daughter should be screened by mammogram at 35 years. However the mammogram is to be avoided if the age of the patient is less than 30 years. And if there is no positive history mammogram should be done after 40 years and if needed an ultrasound would suffice before that.

Our Network Partners
Go to Top